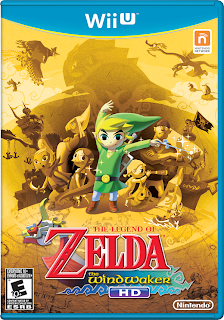 Nintendo has just released the official boxart for The Legend of Zelda: The Wind Waker HD and it is quite stunning. Personally, I always felt the boxart for the GameCube original failed to capture the scale and adventure of this excellent game but this new art is wonderful and the gold background is an excellent nod the series legacy. While further details for the game remain sparse, a couple of gameplay details have surfaced with today's Nintendo Direct.