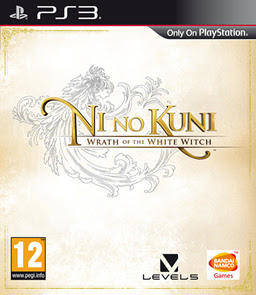 I am a fan of video games in general but it is no secret that my bias is for Nintendo, Independent, Japanese and Retro gaming. I don't own a PlayStation 3 and outside of stumbling upon one for free, I have no intention of ever owning one so the release of Ni No Kuni for PS3 bums me out and makes me happy at the same time. Before you cry fanboy foul on me, let me make it clear that I am thrilled that the game made it to North America in some form and I am truly thrilled for the PS3 crowd who get to experience this fine piece of interactive art from one of my all time favorite animation studios. I am bummed because I REALLY wanted the Nintendo DS version which Publisher Namco Bandai stated would not be brought over. Namco made it clear that the key factor was the expense involved in translating the "Wizard's Book", a physical companion book needed to cast spells, craft items and reveal various game world details. The PS3 version was planned to have this book worked into the game digitally which made sense. That would have been the end of the story but...

It turns out that the PS3 version just received a "Wizard's Edition" for those who pre-ordered and among the cool bonus items was the Wizard's Book! The very same book Namco used as their excuse for not bringing us the DS version of the game! This is irritating beyond words for fans who really wanted to play the game for the system it was originally created for. What is even more baffling is when you consider the sales numbers of both editions in its homeland.
That's a pretty large gap in sales and the North American RPG market on PS3 isn't nearly as large as the Nintendo DS one. While some may argue that the DS version wouldn't sell by the time of an English release, that argument is void on two points.
The real kicker is that the Nintendo DS/3DS audience already features a built in fanbase for the works of Level 5, the games developer. Namco could have just advertised the game as:


"A new RPG from the Developer that brought you Dragon Quest IX and the Professor Layton series!"

What's really odd is that Namco is bringing over Project X Zone for the 3DS this summer which sold far fewer copies than Ni No Kuni!? Bare in mind that I am not complaining about Project X Zone coming over (I'm not), I am simply drawing a comparison about how odd the situation is.

I'll end this by questioning why the game hasn't been announced for the Nintendo Wii U? All of the work is in porting the game over since the translation is already done and the game would feature the best of both previous versions. The HD graphics of the PS3 with the touch control of the Nintendo DS and you could even incorporate the Wizard's Book on the touch screen and it would feel completely natural. Again I am thrilled the game made it over here, just saddened that the original version did not. The thing that really pisses me off is that if the game doesn't do well on PS3 (which some fans feel is possible), companies will point to that as a reason for not bringing over other JRPG's that could do well. Please comment below on your thoughts about this awesome RPG. Enjoy the Japanese Nintendo DS trailer for this amazing game.